In its 8th season (2017), Nami Moon Farms is a diversified livestock operation focusing on pasture-raised poultry. We raise several thousand “Freedom Ranger” broiler chickens, several hundred Muscovy ducks, and several hundred conventional, broad-breasted bronze turkeys per year. We also raise heritage hogs, we maintain a heritage turkey breeding flock for ~100 heritage turkeys per year, we have a ~300 chicken and ~100 duck layer flock, we raise annual vegetables in our three high tunnels and ~1 acre ‘garden’, and we raise perennial fruits and vegetables as well. Additionally, we plant small grains and the occasional row crop in our effort to master that side of farming and to provide supplemental feed components for our animals. We have also been known to dabble in raising bees, but we also promote other pollinators through programs like the Conservation Stewardship Program via the National Resource Conservation Service (NRCS) that have provided us with some funding support for such efforts. We have also received support from the Farmer Veteran Coalition, The Frontera Foundation, and DATCP.

We are not certified anything, as our practices hinge upon financial sustainability and our own personal philosophies when it comes to how we farm. There are conventional, non-GMO, and organic aspects to our farm, and we are constantly learning of how to improve what we do and how we do it. We have 100% transparency, and we are happy to explain why we do what we do to anyone who is curious. We also strongly believe in sharing all we have learned with other farmers, and we are not interested in scaling up too much, as we would prefer to see more farmers on the land and not just a small handful of larger operations. Though industrial agriculture has its place in this country (and the world), we believe that farms like ours have their roots in the values and relationships that people have appreciated for generations. These values are often minimized as food systems expand in size and scope, and strong, local relationships are increasingly harder to find. In no small way, we, our farm and others like us are the last few vertebrae holding rural America together.

Our products are available on a year-round basis (winter shipping possible), and in addition to selling at the Dane County Farmers Markets we work with several restaurants in the Madison along with a small sampling of products at Metcalfe’s Hilldale.

We (Maria Davis and Chris Holman) are beginning farmers who started our farm while still living in Madison. Having our farm in Custer, WI (10 miles east of Stevens Point) meant moving north, and though we missed Madison quite a bit early on, we’ve found a strong community of fellow farmers here who help to make our region a thriving one for farmers and non-farmers alike. Having a presence at the DCFM has long been a dream of ours, so we are happy to have been welcomed into the DCFM community.

Chris is a farmer-veteran (Army), who also serves on the state board of directors for Wisconsin Farmers Union (District 6). In the first few years of farming, Chris worked off the farm as an adjunct lecturer teaching Arabic language and Middle Eastern Geography at UW-Madison, Madison College, UW-Stevens Point, and mostly at Cornell College in Mt. Vernon, IA. Now a full-time farmer, he writes about agriculture and agricultural issues as well as advocating for farmers and agriculture at the local, state, national, and international levels. An Oregon native, he has lived all over the United States and moved to Wisconsin in 2010 to be with Maria and start the farm.

Maria is a graduate of UW-Madison, and she quickly transitioned into the Buy Fresh, Buy Local Director position at REAP Food Group in Madison. She lived in Madison until the farm’s fourth year, when she finally moved to the farm. Soon after, she began to work for Patrick Rothfuss, a New York Times Best Selling Fantasy author. She is the director of Worldbuilders, a non-profit started by Rothfuss that generates over two million dollars per year through its annual fundraiser and other efforts. 100% of the money that is raised goes to Heifer International, and Worldbuilders funds itself through its online store, its increasingly diverse revenue streams (i.e. working with other authors), and the occasional fundraiser. A Wisconsin native, she was born in Eau Claire before moving to the home we live in now in 1996 with her family.

Our daughter, Eleanora (AKA Leni), was born on March 25th, 2016 and she has been an amazing addition to our lives. Yes, farming has been a little more difficult here and there with her along for the ride, but by and large she’s probably the best decision either one of us have ever made. We are looking forward to finding an age-appropriate shovel and other equipment so that she can join us in our work on the farm. Maybe, if we do it right, she’ll even want to stick around for a while or maybe come back to the farm some day and pick up where we’ve left off. We’ll see! It has been an incredible, unpredictable, and enjoyable adventure. 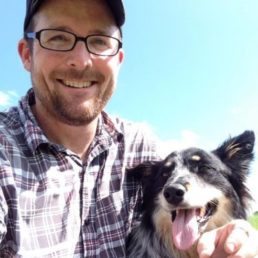